Insecurity : Working from prison, an outlet for thousands of prisoners in Latin America

Working from prison, an outlet for thousands of prisoners in Latin America

A penalty of Cuzco, in Peru, offers the possibility of working informally prisoners behind bars and so assist their eventual reintegration into society 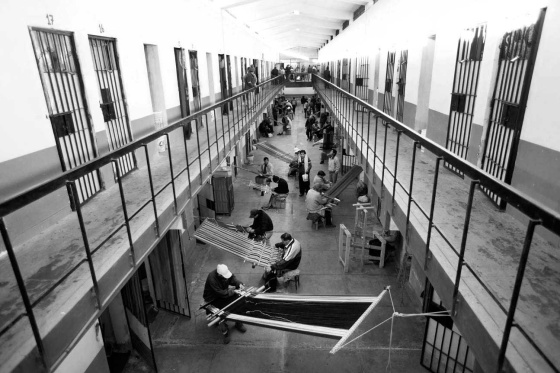 Since he is in prison, almost four years, Daniel has not stopped thinking about her family or Year 2022, when should again be free. Time does not go fast enough in criminal Quencoro, Cuzco, where the young man is serving alongside other 1.900 Inmates.

But since she started making and selling traditional textiles outside prison, feel you are ensuring the livelihood of his wife and son until the day that he be released.

Daniel, of 30 years old, He is one of thousands of prisoners as part of nascent reintegration programs through employment, seeking to restore the true meaning to the word "rehabilitation" in one of the most inefficient prison systems in the world.

Overcrowding, corruption, lack of control and recidivism are just some of the serious problems facing prisons in Latin America.

For example, the prisons in El Salvador have an overpopulation of 334% (or three times more than planned) Bolivia and the figure reaches the 263%. Peru ranks third in this ranking, with an occupation of 225%.

Only 45% of inmates have a court judgment. Many crimes in cities like Lima, Bogota and Tegucigalpa are devised from prison and most inmates quickly returns to criminal after his release, turning their reintegration into society in failure, experts.

There is a divorce between the judiciary and penal. Those who make the laws and those who administer justice do not usually take into account the ability to lodge criminal, as conceded by the authorities themselves.

"The prison benefits are cut and stiffen penalties, innermost of those who leave and enter spaces available virtually unchanged ", says José Luis Pérez Guadalupe, President of the National Penitentiary Institute of Peru. He adds that "in addition, an important part of the prison population is still waiting for a judge to decide definitively whether or not guilty ".

The increase in the prison population in Latin America has gone viral hand rising crime. Seven of the ten countries withthe highest murder rates in the world are in the region.

While there is no single reason for both phenomena, no magic wand to solve, is difficult to think of an effective social reintegration without taking into account the conditions of social exclusion that lead to crime.

A project of National Penitentiary Institute of Peru aims attack, precisely, the causes of social exclusion that afflicts most of the prisoners, especially in the Andean prisons. The so-called Criminal-School Workshop It is a strategy that seeks to change the values ​​and perspectives of re-employment of individuals deprived of their liberty.

This initiative, supported by the World Bank and other institutions, promotes the training of young people at work crafts, textiles, hides and other products, which are then sold in many places of tourist circuits, or supermarkets.

For many internal, such as Daniel, proceeds from these activities are the main source of livelihood for their families and their only option to follow "caring from prison".

Now, well, the importance of projects like this is that not only help to improve the economic conditions of families of prisoners, which are among the most vulnerable in the region. "It represents a model of rehabilitation through economic inclusion, which is one of the pillars of the ambitious process of prison reform in Peru”, Governance expert says World Bank, Sergi Pérez Serrano.

These initiatives, according to the specialist, support what should be the mission of the prison systems: become real opportunities for social inclusion.